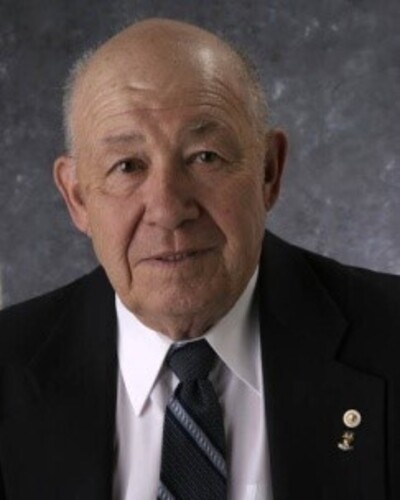 It is with heavy hearts and great sadness that the family announces the death of John Andrew Cletus Kennah on Sunday, November 29, 2020 at Villa Sormany, Robertville, at the age of 97.

Born in Bathurst, he was the eldest son of the late Jack and Nellie (Mary Ellen Doucet) Kennah.

Cletus is also survived by his sister, Mary Toone of Bathurst. He was predeceased by his two brothers John “Chuck”, Kenneth “Ken” and his sister, Eleanor McNally.

Cletus was a lifelong resident of Bathurst where he and his wife, Stella, raised a family of six. They met in Chatham, NB at St. Thomas University and married on May 6, 1948 in Bartibog on the Miramichi. He worked for years with his father, Jack, at Kennah Bros. Garage on Main Street just through the back yard and across the street from where we lived. Later, he became the registrar for the New Brunswick Community College where he worked until he retired from the campus on Youghall Drive. He was there from the beginning days of adult education in our province and contributed much to its organization and development for which he was well respected in the field. In all his working years and well into retirement, Cletus was an active member of this community through organized sports and Boy Scouts when he was younger, and the Irish Canadian Cultural Association and 4th degree member Knights of Columbus Mgr. Wheten Assembly #0615 most of his life. He dedicated a big part of his life to helping and coaching other people. He touched many lives in many different ways and will be remembered by many as a fine man. That he was – a good man, a kind man, a fine man. Cletus was most at home at his camp up river surrounded by peace, quiet, and the beauty of nature. It was his resting place. We love you dad, and we will miss you forever.

The family would like to thank the staff at Le Chateau Royal, Manoir Brise de l’Oasis, and the nursing staff at the Chaleur Regional Hospital and Villa Sormany who helped with his care in these last years and days of his life.

Due to Covid restrictions, funeral services will be held at a later date. Funeral arrangements will be arranged through Elhatton’s Funeral Home (www.elhatton.com), Bathurst.