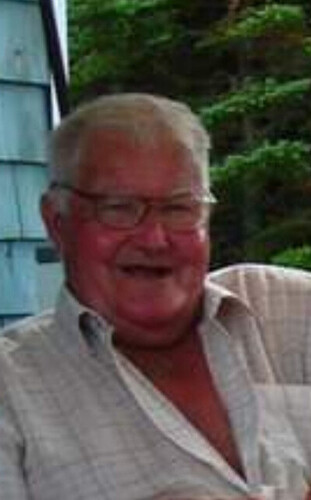 He is survived by his wife of 59 years Joyce Lavigne (King), his daughter, Corrina Lavigne of Salmon Beach, NB and two sons: Kevin Lavigne (Michelle) of Courtice, ON and Steven Lavigne of Salmon Beach, NB. He also leaves behind his greatest treasures, his five grandchildren: Laura Lavigne, Nathalie Lavigne, Reece Nauss, Leslie Lavigne and Claire Lavigne.

Born in Bathurst, Arnold was son of the late John and Ethel Lavigne (Russell). He was predeceased by a sister, Margaret.

He has two surviving sisters: Mary MacDonald of Miramichi, NB and Rose (Jerry) Maruschak of Woodstock, ON and a brother, Leo Lavigne (Claudette) from New Bandon, NB.

Arnold was in the Armed Forces in his younger years, living in Toronto, Winnipeg and Germany. After starting a family, Arnold and Joyce moved to Salmon Beach to raise their children. Arnold had several career paths including working at the mines, delivering furnace oil, owning his own Business (Lavigne Fuels), lobster fishing and security guard at the hospital and federal building.

Arnold was a lover of sports. For many years he would be found at the ballfield or hockey arena. If he wasn’t playing, he was refereeing, coaching or managing. Being an active community member was always important to him and he will be fondly remembered by many for his countless years of time volunteering with local teams and as a boy scout leader. With his kind heart and sense of humour he has left generations of adults with great childhood memories. Even in his senior years, he continued behind the scenes with the central midget hockey league.

Arnold was loved by many and will be missed dearly by his family and friends.

A special thank you to the Extra Mural program and home care workers for the care given to Arnold.

A celebration of life will be held on Saturday August 7th, 2021 from 2 to 4 p.m. at the Janeville Fire Hall.

Donations in memory of Arnold may be made to the Arthritis Society, the Canadian Cancer Society or a charity of the donor’s choice.