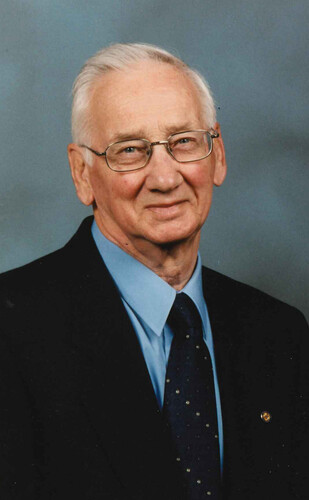 Bathurst – It is with great sadness that we, the family, announce the passing of Arnold Blanchard at the age of 91 on January 8, 2021.

He was the son of Stanislas Blanchard and Victoria Christie.

His three grandchildren, whom he adored: Harley Mann of Middle River, Kayla (Francois Bérubé) of Cobourg, ON and Kyle Blanchard (Natalia Levesque) of Cold Lake, AB.

He was pre-deceased by his two sons: Paul and André as well as his brothers: Wilfred, Kenneth, John, Harvey and an infant sister, Priscilla.

He was employed at Hatheway Ltd. for 45 years as a parts department manager. He was a member of Professional Parts Manager of Ford of Canada, a U.C.T member and an Honorary Member of the Knights of Columbus, Bathurst, NB.

The family would like to thank Extra Mural and Arnold’s Care givers for their help and support.

There will be a graveside service held at a later date. Funeral arrangements are in the care of Elhattons Funeral Home. (elhattons.com)