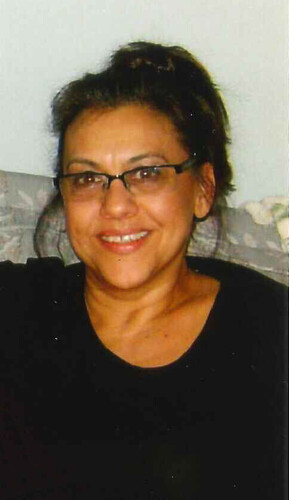 The unforgettable life and irrepressible spirit of Denise Carolyn Kyte came to an end Saturday, February 13, when she passed away at Bathurst Regional Hospital at age 59, her sister Lisa and parents Tom and Yvette Kyte by her side.

Also left behind to mourn her passing are friends Melynda Jarratt and Dan Weston of Fredericton. Denise and Melynda met in high school and shared a special bond of friendship for more than 40 years. When Denise and her son Ryan returned to New Brunswick in 2008 they were welcomed into Melynda and Dan's home. With Denise's passing they too have lost a cherished friend who will be impossible to replace.

The second of six Kyte children, Denise came to Bathurst by way of Ontario and Belledune when her father Tom Sr. was part of the team that set up the Belledune Smelter in the mid 1960s. At the time, the Smelter and Brunswick Mines were the largest industrial developments in the history of northern New Brunswick, and like many others in the mining industry, Tom Sr., his wife Yvette and their growing family rode the wave of prosperity that attracted thousands of mining professionals to new, well paying jobs in the area.

By the early 1970s, the family moved from Belledune to the brand new Hennessy subdivision in Bathurst, where the half-Acadian, half-Arabic siblings quickly left their mark on Bathurst. For several summers mother Yvette, sisters Charlene and Denise along with brothers Tom and Michael, ran the locally famous Golden Sands Canteen at Youghall Beach, creating memories that are seared in the minds of a generation of beach goers who stopped in at the "Sands" on one of those beautiful hot days along the Bay of Chaleur.

Denise graduated from Bathurst High School in 1979 and went on to St. Thomas University where she majored in psychology and was graduating class president in 1984. Her university experiences set the stage for a life of adventure, curiosity and wanderlust that never really left her until the day she died. Combined with her electric sense of humour, an incredibly sharp wit and slapstick comedy performances that could easily have her performing on an international stage, Denise left small town New Brunswick to take on the world.

In Toronto, Denise worked for the Ontario Department of Education as an adult education instructor, a job she truly loved. She later travelled extensively throughout Britain, Europe, the Mediterranean and the Middle East, where she was drawn by her father's Arabic roots to learn more about her ancestral ties to Syria and Lebanon.

The highlight of Denise's time in the Middle East was the one year she spent as a booking agent for cruise ships serving the diving trade in the Red Sea. Never afraid of a challenge, she became a certified diving instructor and took many visitors for underwater journeys in the glorious aquamarine waters off Israel.

In the late 1980s Denise returned to Canada where she worked in finance and the insurance industry. When her son Ryan was born in 2000, she started a new chapter of her life as a mother of a brilliant young boy with whom her destiny would be forever intertwined.

By the time Ryan was 8 years old, Denise had been away for more than 25 years. In 2008, she and Ryan moved to New Brunswick where they settled in Fredericton. Denise found a rewarding career at Yorkville University where she worked as International Student Advisor for students in the Masters Program.

In 2017, Denise was diagnosed with Stage Four Breast Cancer. When others would have given up, Denise just got the engines revving, beginning a four year battle with the disease that eventually took her life. Denise never gave in, even during this past year with COVID complicating what little time she had left. She refused to accept that she could not continue life as always - so Denise just carried on with the wisecracking gags and clowning around that were the hallmark of her personality.

When her hair fell out, she did her research and found the best wig on the market with the financial support of the Canadian Cancer Society. A fashion queen who ordinarily spent a lot of time in front of the mirror fixing her hair and makeup, she didn't tell anyone and thought it was absolutely hilarious when, after all the effort she put into getting the wig, nobody noticed.

Denise read books on healing and self-help; she listened to podcasts and YouTube videos about death and dying; she sought spiritual guidance knowing that she was leaving her son without a mother. It wasn't easy for her to accept the fact that her days were numbered, but still she found time to make others laugh, saying she was going to take a "dirt nap" when she was darn well ready for it.

Thirty-six hours before she died, Denise took an ambulance from Moncton to Bathurst where she had circled back after being away for more than four decades. One of her "demands" was that the male paramedics driving along with her to Bathurst be good looking. Second on the list was that she be allowed to wear her fancy boots, black nylons, black mini-skirt and fabulously fashionable royal purple cape along with a hospital face mask sporting an outrageous set of red lips painted on the front for shock value.

Denise's sister Lisa played a central role in helping her navigate the medical system: a registered nurse, Lisa became Denise's advocate and spent many days at doctor's appointments and in the Fredericton and Moncton Oncology units making sure Denise received the best care possible. It wasn't all doom and gloom: a sense of humour was necessary when dealing with Denise's illness and right up until the day before she died, Lisa found herself in the middle of Denise's entertainment routine for the nurses on the palliative ward at Bathurst Regional Hospital.

The Kyte family would like to thank the small army of angels who helped Denise the last years of her life, including Dr. Salem in Moncton and the many nurses and other medical professionals in Fredericton and Moncton Oncology Units where Denise underwent chemotherapy treatment since 2017. They'd also like to recognize the contribution of her home support worker Lourdes, to whom Denise took a special liking, the staff at the Canadian Cancer Society and of the various provincial government departments she came into contact with as she made her way through the medical system.

Due to COVID restrictions a celebration of life will be held in the summer at a time to be announced.