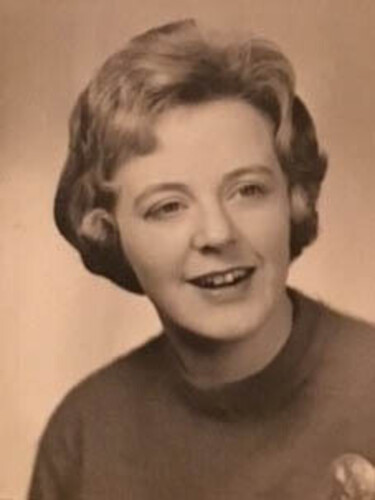 Anne Taylor passed away peacefully on February 28, 2021 at the age of 87 in Fredericton, New Brunswick. Born in New York City, USA. She was the eldest daughter of the late John Bradley and Kathleen (Meahan) Bradley.

Anne moved home to Bathurst, New Brunswick, at the tender age of 6 after her father’s sudden death. She received her post-secondary education from Mount St. Vincent University, then a B.Ed. and M.A. from St. Thomas University. From 1962-64, she was the Dean of Women at St. Thomas.

Anne and Colin were married in 1968 and they spent a number of years in Ottawa, returning to Bathurst in 1980. She was a teacher, Vice Principal, Principal, and then Supervisor for the School District 15 in Bathurst.

Anne was the nucleus of her family; many branches of the family tree were drawn back to Bathurst and Youghall Beach regularly. Her zest for hosting and creating community extended to her dear friends, as well. She was devoted to her faith, and Holy Family Church. In her retirement, she was pleased to take on administrative duties in the parish office. The restoration of the church’s pipe organ was a significant project accomplished during her tenure.

The family would like to thank Windsor Court in Fredericton, NB, for the care and respect shown to her over the last number of years.

Visitation will be held on Wednesday March 3 from 4pm - 6pm at Elhatton Funeral Home, 187 St. George St., Bathurst. The visiting is open to the public with social distancing measures in effect. Funeral Mass will be by invitation only, as per Covid restrictions, at the Holy Family Church, 430 St. Peter Ave., Bathurst. In honour of Anne’s generous spirit, donations in her memory may be made to the Bathurst Heritage Museum or a food bank in Bathurst, her beloved home.

Funeral arrangements are in the care of Elhatton’s Funeral Home (www.elhatton.com).