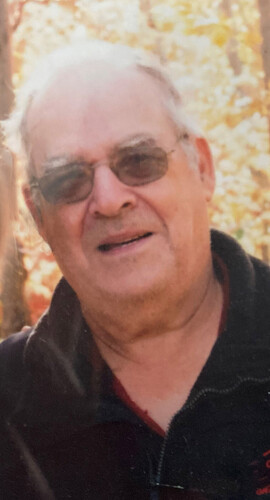 John Howard Crutchfield aged 77 years old of Beresford, NB died suddenly on March 5, 2021 at his home. He was born in the province of Quebec in May of 1943 and was adopted by Howard and Alice Crutchfield. His family moved to Bathurst NB so that his father could help build the paper mill. John eventually was a Shift Engineer with Smurfit Stone, the paper mill, for many years until his retirement. Anyone who knew John, knew that retirement was not really going to happen. He subsequently went to work at the Carpet Ranch and Juleo where he once again built strong relationships and became a part of the family.

John’s proudest accomplishment was being a father to his two children Dawn Crutchfield Stewart and David Crutchfield. Throughout their childhood he was actively involved in all their activities. Whether it was coaching their hockey or ringette teams, being a scout leader, or taking them to skate parks and ski hills. John was the ultimate father in that he could build anything, from a backyard half pipe for snowboarding, or a basketball court. He continued that support of them as they grew up and moved away. They could call him with any problem, and he was always there to listen. If it involved fixing things, he would provide a lengthy detailed explanation as to how to do so.

John was also affectionately known as Grampy Choo-Choo to his 3 grandchildren, Rowan, Jonathan and Jocelyne Stewart. He shared with them his love of trains and involved them in any activity where he was fixing something. There were many adventures, and history lessons when he visited them in Bedford Nova Scotia. They would explore many of the historical landmarks, trails, lakes, and beaches during his visits creating beautiful memories. When they visited him in Bathurst, they would camp in his backyard, go to the Danny Burger, visit the beach, and play with his many, many cats.

He could also fix anything! He loved to prove that anything could be fixed and would have a half smirk on his face when he had successfully fixed something that was deemed unfixable.

John also had 2 other loves in his life, model railroading and his cats. The landscapes and worlds he created with his Model trains were out of this world. It became an attraction to all the children in the neighborhood. The kids felt honored to be allowed into the “train room” to look at what he had built from scratch.

John was a very kind and generous man, who taught his children that our differences were opportunities to learn about different cultures, religions, and beliefs. He was always ready to help anyone. He was well loved in his community. He will be missed.

We will forever keep him in our hearts, and we are comforted knowing that he went peacefully in his sleep with no illness or suffering. He was larger than life, both physically and figuratively, but he left us all knowing that he loved his family and friends dearly. He showed us that every time we were with him.

Due to the pandemic, a celebration of his life will take place at a later date. Arrangements are in the care of Elhatton Funeral Home (www.elhatton.com), Bathurst.