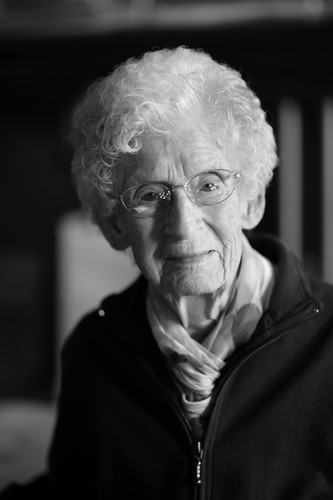 It is with great sadness that the family of Dorothy May Townsend of Bathurst New Brunswick announces her passing on July 25, 2019 at the Foyer Notre Dame de Lourdes at the age of 99. She was predeceased by Frank, her husband of 66 years.

Dorothy was born in Windsor, Nova Scotia, the eldest of two daughters of the late Jenny and Alfred Hoffen. Her father passed away when she was eight years old, and she was raised during the depression years by a widowed mother who also cared for her grandparents. She was raised in a household that was, to say the least, not wealthy or privileged, but had strong moral and ethical values that would continue with her for the rest of her life.

After graduating from high school, she trained as a Registered Nurse at the Ottawa Civic Hospital graduating in 1942, after which she returned to work as a nurse in Windsor. It was there that she met her future husband, Frank Townsend, who was stationed as a sergeant at the Windsor army base preparing troops for World War II deployment. Married in 1944 they relocated to St. Catharines, Ontario following the war and she continued her nursing career as a private duty nurse and then as head of the recovery room at the Hotel Dieu Hospital for many years. She retired from nursing in 1982. She and her husband bought a summer home in Bathurst, New Brunswick in 1994 and finally relocated there on a fulltime basis in 2010.

A woman of faith, she attended St. John’s Presbyterian Church in Windsor, then Knox Presbyterian in St. Catharines (for 65 years), and finally St. Luke’s in Bathurst. In her younger years she was actively involved in the Eastern Star and Lady Shriners.

There will be no visitations at the Funeral Home.  A celebration of life will be held on Friday August 2, 2019 at 11 a.m. from Elhatton Funeral Home Chapel (www.elhatton.com), Bathurst and an internment service in Windsor, NS.

The family wishes to extend its sincere gratitude to the staff at the Foyer Notre Dame de Lourdes for the exceptional care Dorothy received in her three-plus years stay there.

Donations in memory of Dorothy may be made to the SPCA or a charity of the donor’s choice.
Notre équipe