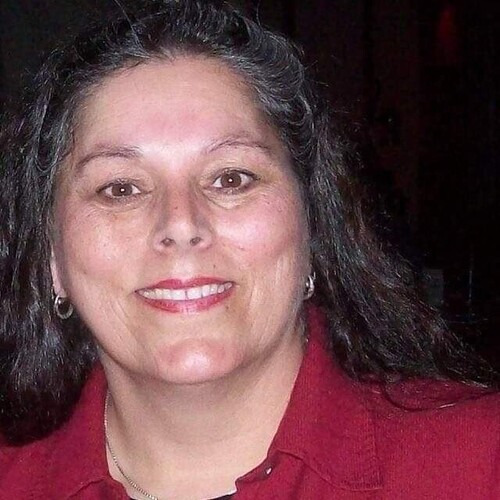 Bathurst, NB - It is with profound, surreal sadness that I, Christopher Stephen Pitre, announce the sudden and unexpected passing of my mother, Pauline Pitre, at the age of 61 on Saturday, January 30th at her home in Bathurst, NB.

Born in Bathurst, NB, mom was the daughter of the late David Pitre and late Evelyn (Pitre), both of South Tetagouche, NB.

Affectionately referred to as, “The Queen of Karaoke” by the community for her popularity as a singer (and as “Miss Mayor” by me for her seeming inability to walk more than ten feet in public without being recognized and stopped by someone--to which she’d speak for no less than 15 minutes…EACH), mom was a very well-known and well-loved musician and pillar of community in the Northern New Brunswick region for the better part of three decades.

Across that time, she touched the lives of many, having performed as the entertainment for those with special needs at an annual dance in Beresford, N.B. for many years running; sang at the Curl For Cancer benefit often; performed for the yearly Christmas Parade in Bathurst many times; entertained at the Bathurst Promenade Waterfront every summer; and hosted countless benefits, karaoke events, singing competitions, band performances, private parties of every concept, and virtually anything you can think of having to do with music.

Beyond entertainment, my mother also touched many lives as a social advocate, serving as the President of the Violence Against Women & Children Committee through Family Services, and working as a crisis intervention facilitator for emergency cases for abused women.

Outside those worlds she so adored, mom’s favourite pastimes included riding her motorcycle, spending time at the beach, singlehandedly winning “Best Customer at House of Lee” a record 968 times in a row, and probably finding the cheapest price for on-sale hamburger (or anything, really) she could track down in the flyers, saving a cumulative $7.68 across her seven decades. (Listen: We all know it’s true, and there’s no point denying it now.)

Mom was a creature of habit and simple pleasures, but also one whom enjoyed them unapologetically – and much to the teasing of her perpetually prodding son, which I cherish as sacred memory and part of our uniquely special relationship.

Mom never minced words. That’s not to say she didn’t mispronounce them—I’m certain she still thought the captain of the Enterprise was Captain Prichard, and her referring to Metformin as McFormin left you wondering if the prescription were to be picked up at the pharmacy or with a coke and fries—but you never had to guess where you stood, with her. And usually, you knew you had made her good graces when you were awarded the oft-used, ever-loved nickname, “Pet.”

To say that my mother was well-known and well-loved strikes inadequacy at the word “understatement”. And while in a fit of fate’s comedic sensibilities mom’s stature stood that of only 5’3 to my 6’3 (I often introduced myself as being the result of a C-section, when together, always causing mom to laugh and quickly apologize on my behalf) -- it was obvious that despite our heights, mom was the giant wherever we went.

Singing, being an entertainer, and excelling as a doting servant joyfully consumed the vast majority of mom’s life. She was always just a phone call away, ready to help others – ready to perform, and ready to serve, as was her life’s calling.

And with this serves a poor substitute for the summary that is her life, but one felt with the efficacy of a life lived by her, and lost by us, that words simply cannot convey.

Karaoke Queen; Miss Mayor – Mom: You will be sorely missed but never forgotten, having left your mark on this community, all our hearts, and—incomparably, undeniably—my life, in a way that will be felt and influential for decades to come.

Due to COVID-19, a public celebration of Pauline Pitre’s life will be announced at a later date.

Donations may be made in Pauline Pitre’s name to the Heart & Stroke Foundation of Canada.  Arrangements are in the care of Elhatton's Funeral Home (www.elhatton.com), Bathurst.