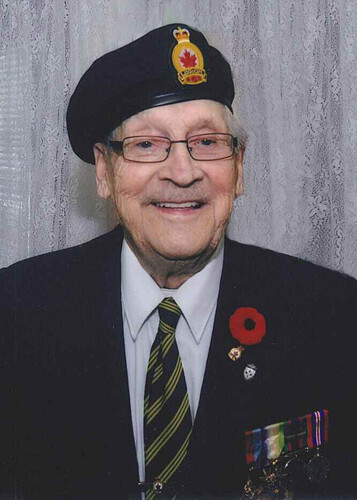 Bathurst – The family of Donald Hugh Black, husband of Yolande (Henry) Black, are saddened to announce his passing on Friday April 2nd, 2021 at the Robert L. Knowles Veterans Unit, Bathurst at the age of 99.

Born in Big River, he was the last surviving member of his immediate family to the late James and Katherine (Bateman) Black.

Donald was a veteran of World War II, serving in Canada and overseas and was a member of the Herman J. Good, V.C. Br. 18, Royal Canadian Legion, Bathurst. Proud member of the North Shore Regiment, he first joined the Army then the Navy. He served on the H.M.C.S. Bowmanville ship during the war. When the war was over, he went to Forestry School in Fredericton where he met his lifelong partner and married shortly after. He worked for the Provincial Government as a surveyor for many years. He loved the outdoors.

In later years, he worked as a prospector which took him to many places across Canada. He stayed in many outdoor tents and loved to cook. Donald was a great storyteller and had a great memory for details. He loved to converse with people and always had a joke or two for them.

In the last years, he was at home at the Robert L. Knowles Veterans Unit. Amazingly while there he found his singing voice. He could be heard singing in his room, at events or for the residents in the hall.

He was the father to Sally Black, Nancy Arseneault (Camille) and Joey Black (Sandra) all of Bathurst.

He is also survived by many nieces and nephews.

He will be sadly missed by the many that knew him including his puppy “Star”.

He was the last surviving member of his immediate family and was predeceased by brothers: James, Cecil, Lloyd and sisters: Martha Carey, Beatrice Branch, Myrtle Smith, Doris Blanchard and Pearl Branch.

The family would like to take this opportunity to thank the outstanding staff members at the R.L. Knowles Veteran’s Unit as well as Dr. Goulard for their kind and compassionate care he received during his stay.

Also, a thank you to his niece Dawn Branch who visited him frequently during his stay at the Veteran’s unit.

There will be no visitation at the funeral home. A graveside service will be celebrated at a later date.

Donations in memory of Donald may be made to the Robert L. Knowles Veterans Unit or a charity of the donor's choice. Arrangements are in the care of Elhatton Funeral Home (www.elhatton.com), Bathurst.