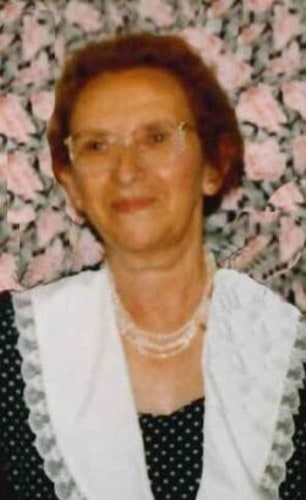 Loretta Davis wife of the late Albert Davis, formerly of Bathurst, passed away Sunday, May 12th, 2019 at the Pinegrove Nursing Home in Fredericton at the age of 96.

Born in Bathurst, she was the daughter of the late Evroul and Ethel (Chamberlain) Canty.

She is survived by three sons:  Wayne Davis (Murielle) of Fredericton, Blair Davis (Kim) of Bobcaygeon, ON and Glen Davis of Fredericton.

She was pre-deceased by five sisters: Bertha, Anita, Jean, Emelda, Rita and a brother, Adelard.

The family will receive relatives and friends after 2 p.m. on Wednesday, May 15th  at Elhatton Funeral Home (www.elhatton.com), Bathurst. Funeral Mass will be celebrated Thursday, May 16th at 11 a.m. from Holy Family Church.  Visiting hours are Wednesday from 2 to 4 p.m. and 9 a.m. Thursday until time of Funeral.

In memory of Loretta, donations may be made to the Canadian Cancer Society or a charity of the donor’s choice.