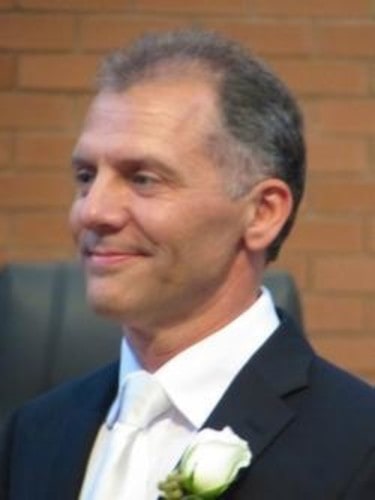 Pickering, ON - Thomas Leo Isaac Kyte Jr. (Tom), age 54, died peacefully at his home in Pickering Ontario, surrounded by his loved ones on Tuesday, May 21, 2019 after a long battle with cancer. He was born in Amherst, NS to Thomas and Yvette (Doiron-Gould) Kyte.

He graduated with a diploma in Mechanical Engineering from CCNB and Health and Safety from Ryerson University in Toronto.

He married Ania Lipinska on July 11, 2014 in Pickering ON and joined her family to celebrate in Poland along with his mother and father.

He was always prepared - both in life and at work, where he spent over a decade as a Health and Safety Professional at Safran Landing Systems (formerly Messier-Bugatti-Dowty). But he’ll be remembered most for his kind heart, dedication to his family, and his love of music and speed. If he wasn’t singing and playing the guitar, riding his motorcycle or snowmobile, or searching through fliers for the week’s best deals, you’d likely find him tending to his beloved truck, mowing the neighbors’ lawns, or grilling massive steaks with his secret spice for a home full of friends and family.

He is survived by his beloved wife of 11 years, Ania; step-son, Daniel; step daughter, Catherine (Robert Scott); parents, Thomas and Yvette; sisters, Lisa (Roch Boudreau), Charlene, and Denise; nieces, Jessica and Pamela; and nephew Ryan. He was predeceased by brothers, Gerald and Michael.

There will be no visitations at the Funeral Home.  Funeral Mass will be celebrated on Friday, June 14, 2019 at 2 p.m. from Holy Family Church, Bathurst.  There will be a celebration of Tom’s life held in Toronto at a late date.

A mass in Tom’s honor will also be held in Poland June 14 at Parafia pw Wszystkich Swietych in Siemonia, Poland followed by a gathering of Tom’s Polish family.

Donations in Tom's memory may be made to the Princess Margaret Cancer Centre.  Arrangements are in the care of Elhatton’s Funeral Home (www.elhatton.com), Bathurst.