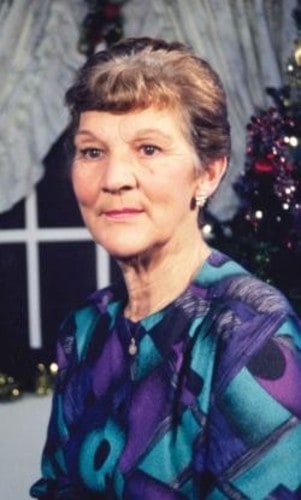 Bathurst – Ann Eileen Kennedy of Ocean Ridge Drive, Bathurst, passed away on Sunday, June 2, 2019 at the Chaleur Regional Hospital at the age of 84.

Born in Bathurst, she was the daughter of the late William and Helena (Lavigne) Garrett.

She is survived by two sons: William Kennedy (Kate) of Houston, BC and Wilson Kennedy Jr. of Montreal, PQ

She was predeceased by five brothers, Arthur, John, Percy, William and Robert and four sisters, Theresa, Marie, Eleanor and Helena.

There will be no visitation at the funeral home.  Funeral Mass will be celebrated on Wednesday, June 5, 2019 at 2 p.m. from Sacred Heart Cathedral, St. Andrew St.  Arrangements are in the care of Elhatton Funeral Home (www.elhatton.com), Bathurst.