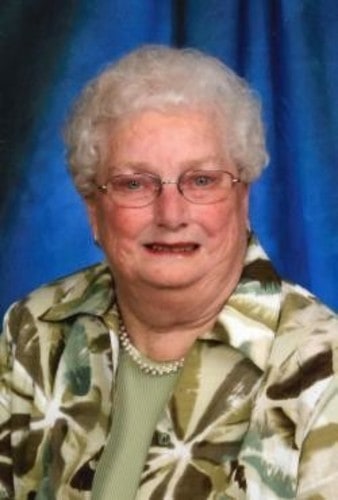 Mrs. Edna Clouston, of Salmon Beach, passed away at the Chaleur Regional Hospital, Bathurst on June 2, 2019 at the age of 86.

Born in Salmon Beach, she was the daughter of the late Norman and Annie (Scott) Jago.

Edna is survived by her husband, Murray and sons Elwin, Lester (Peggy) and Dale (Isabel), all of Salmon Beach.

She is also survived by brother and sister-in-laws:  Alma Clouston, Ella Davidson, Essel and Alton Smith, Hilda MacKay, Ruth Clouston, and Edith and Hugh Clouston.  Many nieces and nephews.

She was predeceased by a granddaughter Natasha and a sister Velma Ronalds.

The family will receive relatives and friends on Friday, June 7, 2019 from 2-4 and 7-9 pm at Elhatton Funeral Home, with an Eastern Star service at 6:40 pm, (www.elhatton.com) St. George St, Bathurst.  Funeral service will be held on Saturday June 8, 2019 at 1 pm from Elhatton Funeral Home Chapel.

In memory of Edna donations may be made to the Extra Mural Program, Shriners Transportation Fund or St. Albans Cemetery Fund.