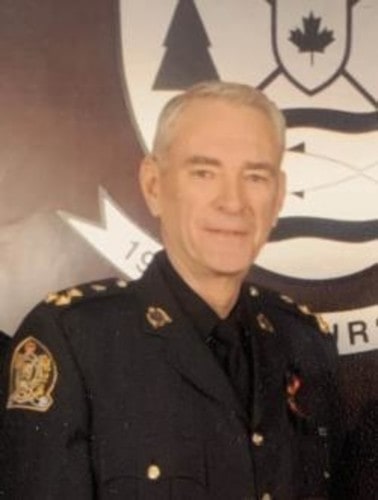 It is with great sadness that the family of Edward Huzulak, husband of Gabrielle Roy-Huzulak of Bathurst announce his passing which occurred peacefully at his home on Sunday June 30th, 2019 at the age of 73.

Born in Greenfield Park, QC he was the son of the late Edward Huzulak and Mabel (Wallace) Huzulak.

Besides his wife of 39 years, Gabrielle Roy-Huzulak, he is survived by his son

As well as many nieces and nephews who also share in our sorrow.

Besides his parents, he was predeceased by a brother Michael.

Edward was a police officer in Greenfield Park, Qc for 10 years before moving to New Brunswick where he held the position of Deputy Chief for the BNPP Regional Police in Nigadoo in 1981.  He was then promoted to Chief of that police force in 1988.

The family wishes to thank the nurses and doctors of the oncology departments in Moncton and Bathurst.  Thank you, Cindy and your extraordinary team, at the Bathurst oncology department for all your support which made his treatments (7 days a month) a little less difficult.  Edward was courageous throughout his illness.

Donations in memory of Edward may be made to the Chaleur Regional Hospital Foundation for the oncology department.

As per his wishes, there will be no visitation at the funeral home.  Funeral mass will be celebrated Friday July 5, 2019 at 2 p.m. from the Sacred Heart Cathedral, Bathurst.