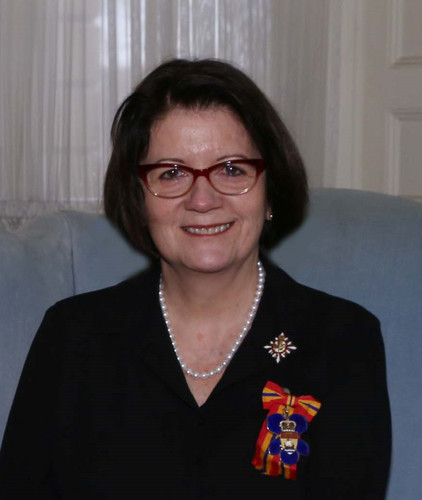 Bathurst - Her Honour, the Honourable Jocelyne Roy Vienneau, ONB, Lieutenant-Governor of New Brunswick, wife of Ronald Vienneau of Pointe-Verte passed away Friday August 2nd at the Chaleur Regional Hospital, Bathurst at the age of 63.

Born in Miramichi she was the daughter of Mélanie (Morris) Goyette and the late Léon T. Roy.

Jocelyne Roy Vienneau becomes New Brunswick’s 31st Lieutenant Governor, after a long and successful career focused on economic development, the promotion and advancement of education and community engagement.  In 2014 she ended her second and final mandate as Vice-President at l’Université de Moncton’s Shippagan Campus. She holds a Masters in Public Administration and a Bachelor of Applied Science in Industrial Engineering from l’Université de Moncton, as well as a teaching certificate from the province of New Brunswick.

Throughout her career, she has sought to promote and advance research and innovation. Ms. Roy Vienneau served as Assistant Deputy Minister for Post-Secondary Education for the Province of New Brunswick.  She also worked at the New Brunswick Community College in Bathurst for 23 years as dean, department head, professor and finally, principal during the last six years. She began her career as a project engineer at Esso’s Imperial Oil refinery in Montreal.

In 2003, she was named Alumni of the Year from l‘Université de Moncton’s engineering faculty. In 2001, during her time as principal of New Brunswick Community College in Bathurst, the school became one of the first two colleges in the country to be eligible for research grants with the Natural Sciences and Engineering Council of Canada. In 2015, she received the Paul Harris Fellow from the Shediac Rotary Club.

Besides her mother and husband, she is survived by two children: Isabelle Comeau (Éric) of Hantsport, N.S., and Cédric Vienneau (Sandrine Krémien) of Shippagan.  Two grandchildren: Simon and Mathieu.

The family will receive relatives and friends Wednesday August 7, 2019 at the Héritage Funeral Home (www.mfheritage.com) 270, rue Centre, Beresford.  Visiting hours are Wednesday from 2 to 4 p.m. and 7 to 9 p.m.

Funeral Mass will be celebrated on Thursday, August 8, 2019 at 11 a.m. from Sainte-Thérèse d’Avila Church, Robertville.
In memory of the Honorable Jocelyne Roy Vienneau a donation may be made to the Canadian Cancer Society or a charity of the donor’s choice.