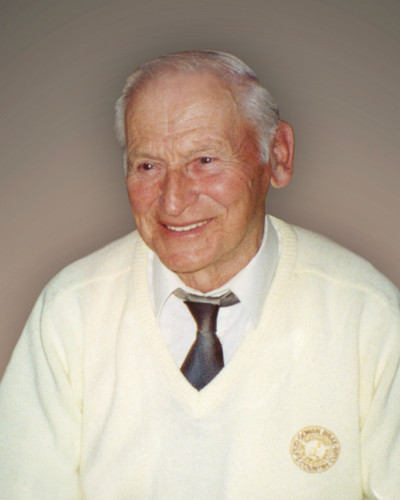 It is with great sadness that we announce the death of Antonius “Tony” Vander Pluijm husband of the late Irene (Tremblay).

He passed away peacefully at the Chaleur Regional Hospital on April 8th, 2020 at the age of 97. Tony was born in Bathurst and was the last surviving member of his immediate family. He was the son of the late Thomas and Ellen (Christie) Vander Pluijm.

Tony served in the Merchant Navy and the Canadian Army (Armoured Core) during WW2. He was retired from Lounsbury’s motor division where he worked for over 35 years. He was a member of Herman J. Good V.C Branch legion in Bathurst. Tony loved the outdoors with trips up river to his camp. He was an avid curler, loved walks on the trails, sitting by the pool side on warm sunny days and of course a good game of crib.

He is survived by two daughters: Cathy Van der Pluijm and Jackie Picot (Paul) and two sons: Tony (Bonnie) and Stephen (Johanne) all of Bathurst.

Besides his parents and wife Irene, he was predeceased by son Peter, daughter Nancy, infant sister Alma, sisters Antonia, Gertrude, Alma and brother Dociety and Johnny.

The family would like to thank all the staff at the Robert L. Knowles Veterans Unit where he resided for the last year and half. He was given such great care.

There will be no visitation at the funeral Home. Due to the Covid 19 a service will be held at a later date. For those who wish, remembrances may be made to the Robert L. Knowles Veterans Unit or the Diabetic Association of Canada.

Arrangements are in the care of Elhatton’s Funeral Home (www.elhatton.com), Bathurst .