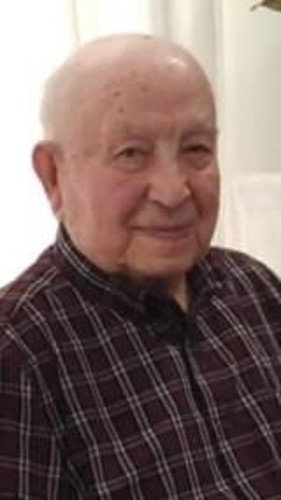 It with great sadness we announce the death of Leonard Christie, husband of the late Marie (Melanson) Christie, formerly of Boucher Dr., Bathurst, passed away peacefully at the foyer Notre Dame de Lourdes April 10th 2020 at the age of 101.

Leonard was born in Bathurst and was the son of the late William Christie and late Mary (Lavigne) Christie.

Leonard worked at Consolidated Bathurst for 46years. Leonard was first and foremost a husband and a father. His favorite pass times were hunting and fishing, spending time at his camp and with his family playing music, he loved to play violin, guitar, accordion, piano and also the flute.

He is survived by his only daughter Mabel (Christie) Thibeault also his grandchildren to which he was so special to Linda (Yvon), Paul (Tracy), Ronald (Sherry) and Richard (Suzanne) also many great-grandchildren and great-great-grand-children.

Brothers: Raymond, Lawrence and Emile all of Bathurst.

There will be no visitation at the funeral home. Due to the Covid 19 a service will be held at a later date.

The Family would like to thank the staff from the 4west unit at the Chaleur regional hospital for the outstanding care they provided while he was there.

Donations in memory of Leonard may be made to a charity of your choice. Arrangements are in the care of Elhatton’s Funeral Home (www.elhatton.com), Bathurst.