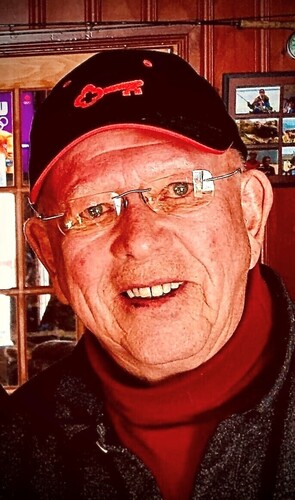 The death of David Allan Ferguson of Baker Lake, NB (formerly of Bathurst, NB) occurred on April 28th, 2020 at the Edmundston Regional Hospital at the age of 83. Born in Newcastle, NB, he was the son of Huntly and Edna (Gieke) Ferguson.

He was predeceased by his wife Jan (Tweedie) Ferguson of Edmundston, NB, as well as his foster sister Edith Carey (Nepisiquit Falls, NB).

He is survived by his four sons, John, Scott (Ginette Deveau-Brewster), Glen of Bathurst, NB and Peter of Barrie, ON.

David graduated from Bathurst High School as school president in 1955 and went on to study business in Moncton, NB. He was employed with “Cement Cartage” in Havelock, NB before leaving for Kelowna, BC in 1966. He managed “Fiberform USI, a pleasure boat manufacturing company. He returned to Bathurst in 1973 to take over his father’s restaurant, “HP Lunch.” In 1974 he went to work with his father for Mutual Life of Canada, where he worked for over twenty-five years, rising to manager of Mutual Life for NB. His retirement years were spent with Jan at their cottage in Baker Lake, NB.

“Fergie” was an excellent athlete playing for many local baseball and hockey teams in Bathurst. His greatest love was curling, which he excelled at, winning two provincial Junior titles and he represented NB at the Canadian National Junior Championship in 1954 and 1955. He also loved golf and played every day he could.

David always gave back to the community as well, coaching many minor hockey and baseball teams, volunteering for the First United Church of Bathurst, The Multiple Sclerosis Society, Gowan Brae Golf Club, Bathurst Curling Club, and other organizations.

Funeral arrangements are in care of Elhatton Funeral Home (www.elhatton.com), in Bathurst, NB. Due to the existing pandemic, a service at a later date will be announced. Donations in memory of David may be made to the Heart and Stroke Foundation of New Brunswick or a charity of the donor’s choice.