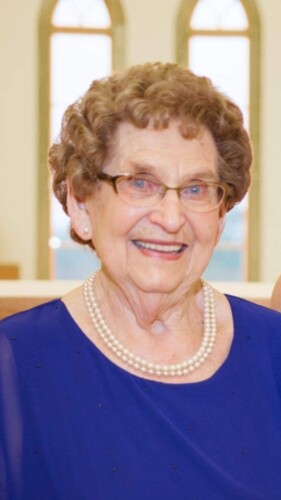 It is with love and sadness that we announce the death of Betty Chamberlain, which occurred on June 4th, 2020 at the Chaleur Regional Hospital at the age of 90. Christened Elizabeth Jessie Reade Maltby, she was the daughter of Richard Maltby and Ethel Branch. Her mother died in 1943 and she was raised by her grandmother, Emma Branch, and her aunts, Lola Branch and Carrie Watling. She was predeceased by Blair (2010), her loving husband and confidant of 59 years.

Betty was a lifetime member of both the United Church Women’s group and the Order of the Eastern Star. She enjoyed her summers at Youghall beach, evenings with her bridge club, time in the “old barn”, the KC Irving and in front of the television watching hockey, and most importantly to her, the many family gatherings held during the year for which she happily cooked and baked. Betty was a caring, giving, energetic, smiling, strong and overall beautiful person who welcomed all into her home. She will be greatly missed by many.

The family would like to extend a special thanks to the Extra Mural team and to Dr. Tony Wade who helped make it possible for Betty to remain in her home with family and friends until that last few days of her life.

Funeral arrangements are in the care of Elhatton’s Funeral Home and due to the existing pandemic, a memorial service will be announced at a later date.

Donations in memory of Betty may be made to the Canadian Cancer Society, the Heart and Stroke Foundation, the Chaleur Regional Hospital Foundation or to a charity of the donor’s choice.