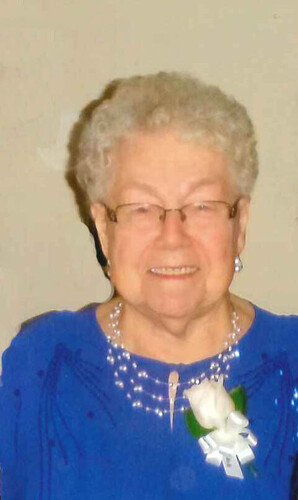 Bathurst – Mrs. Geneviève Chamberlain, 94, wife of the late Ernest Chamberlain, formerly of Church St., passed away, with her family by her side, on Saturday June 20, 2020 at the Foyer Notre Dame de Lourdes, Bathurst.

Born in Bathurst, she was the last surviving daughter of the Joseph and Brigitte (Hachey) Melanson.

She was pre-deceased by an infant son, Ronald, a brother, Alfred and a sister, Aline.

Known to her family as “Mom” & “Mémère”. She spent her life as a homemaker. A visit to Mémère’s house, you were always welcomed with a cup of tea and her many homemade goodies. She always had a stash of molasses cookies on hand and used the same recipe for almost 70 years. If you came at lunch time, you could be sure an extra plate would be set for you. No one ever went hungry at Mémère’s.

The family would like to thank the Brise de L’Oasis and the Foyer Notre Dame de Lourdes for the excellent care given to Geneviève during her stay. She was well liked by everyone she met.

Due to the pandemic, a private family service will be held at a later date. Donations in memory of Geneviève may be made to a charity of the donors choice. Arrangements are in the care of  Elhatton’s Funeral Home (www.elhatton.com), Bathurst.