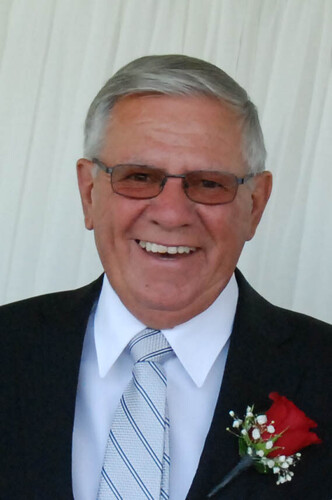 Born in Campbellton, NB he was the son of Expedit Savoie and Opal Chamberlain.

Andy was a devoted husband to his loving wife, Linda Doucet and stepfather to her daughter, Lucie Doucet of Moncton. In addition to his wife, Andy is survived by his children: Sylvie Savoie (Russell Ives) of Yellowknife, NWT, Sonia Thibodeau (Terry) of Bathurst and Jean-Michel Lemarec of Moncton and his beloved grandchildren: Daniel, Sarah, Jacob, Madeleine and Elliot.

Andy was pre-deceased by his first wife Odette (nee Tremblay) and by his brothers: Emile, Marc, Raymond and Leo.

After graduating from Oulton’s Business College, Andy went on to build a successful career in the insurance industry. First as an insurance adjuster then as the owner of Kent and White Insurance. As a member of the Bathurst business community Andy took great pride in our city and was involved in many community organizations like the Insurance Institute of Canada, Kinsmen Club, the United Commercial Travelers, Downtown Revitalization, the Bathurst Chamber of Commerce, the MS Society and countless others.

Andy was an avid golfer, curler and card player. Andy also enjoyed traveling the world and his winter home in Florida, but nothing brought him more joy than the time he spent with his wife, his family and his friends. Andy’s life, and his laugh, will be deeply missed by the many people who knew and loved him.

The family would like to thank the doctors and staff of the Dialysis Unit of the Chaleur Regional Hospital for their care and compassion.

The family will receive family and friends for a public visitation on Thursday, November 19th, 2020 from 7 to 9 p.m. Funeral mass will be held on Friday, November 20th from Sacred Heart Cathedral by invitation only with Father Wesley Wade officiating.

Donations in memory of Andy can be made to Kidney Foundation, Chaleur Regional Hospital Foundation or a charity of the donor’s choice.