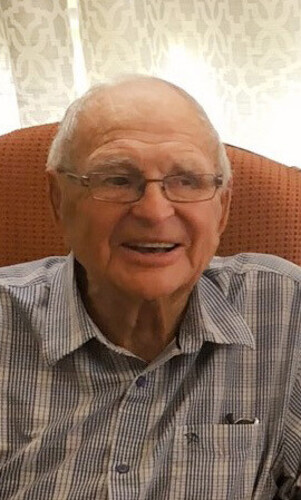 Ralph Good, 82, passed away on Sunday January 31, 2021 at the Chaleur Regional Hospital, Bathurst.

Born in Bathurst, NB, he was the son of Lloyd Good and Dorothy (Daley) Good of Clifton.

He was the much-loved father of Barry (Carol) Good of Pickering, Ontario, Wendy (Craig) Smith of Ottawa, Ontario. He also leaves behind a daughter-in-law Sheila MacGowan of Rothesay, NB. He was the grandfather of four: Jennifer (Kevin) Aguiar and Shayna (Anthony) DelleDonne, Connor and Erica Smith, and great-grandfather of Logan and Scarlett DelleDonne.

Ralph worked for many years at Lounsbury’s in Bathurst. He was a born salesman and loved cars. He could sell sawdust to a lumber mill. He spent some time with the Bathurst Nissan dealership before retiring. He later became a school bus driver, which combined his love of driving with his love of children.

Ralph had many lifelong friends in Bathurst and enjoyed spending time with them. Ralph loved going for drives and eating out at restaurants with his friends, especially his early morning coffee/breakfasts with the gang. It was nothing to drive a few hours just to go eat out at a specific restaurant.

Ralph loved his family and friends. He used to love when the backyard pool was filled with his kids and their friends and later their families. Ralph made friends wherever he went. He brought joy to many lives. He was very entertaining and was the best storyteller around.

Ralph was always smiling and happy. The kids on his school bus used to call him Smiley.

He had such a wonderful, positive outlook on life.

The family would like to thank the staff of Residence D M Boudreau where Ralph has lived for the last 2 years. They are wonderful and took very good care of Ralph. He had wished he had moved in sooner.

Donations in memory of Ralph may be made to the Canadian Cancer Society or Diabetes Canada.

Funeral arrangements are entrusted to Elhatton’s Funeral Home (www.elhatton.com) of Bathurst. Due to the current pandemic, a funeral will be held at a later date.