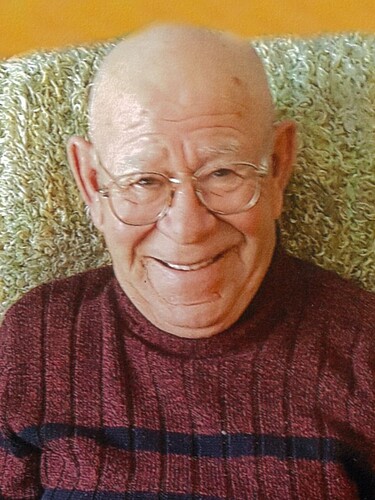 It is with great sadness that we the family, announce the passing of our Dad, Charles “Charlie” Vienneau, of Rio Grande, which occurred at the age of 82 on Sunday, March 7th at the Chaleur Regional Hospital.

Born in Bathurst, NB he was the son of the late Frank and Amanda (Chamberlain) Vienneau.
Dad leaves behind his partner Therese Vienneau and her children: Marcel (Charlotte), Marc (Cathy), Denis (Chantal), Nathalie (Marcel) and Sylvie (Christian).
Grandchildren: Patrick, Joel, Jeremie, Jessie, Shany; great-grandchildren: Melodie, Mia, Malika, and Olivier who he adored and embraced as his own.
In his earlier years Dad was married to Edith Doucet (Branch) and together they had five children: (late) Frank (Denise) Vienneau, Sandra (Randy) Doucet, Karen (Kevin) Smith, Gail (Dale) Valley and Pauline (Fred) Elhatton.
Grandchildren: Wesley, Chelsie, Stacy, Shawn, Cory, Robyn, Katherine, Erin, Paige and Cody.  Great-grandchildren Isabella, Jimmy, Octavia, Frankie, Anna-Belle, Charlie, Austin, Olivia, Colton, Jackson, Mitch, Hayden and Emmitt.
Also is survived by his brother, Jean-Guy (Colette), sisters: Lauza St.Hilaire (late Jean-Paul), Germaine Derby (George), Edna Bremner (Clifford), Melinda (late Beverly) Branch, Nancy (Emile) Chamberlain and Shirley (Gilles) Daigle.
Besides his son, Frank, he was predeceased by his brothers Adrien, Andre, and Anthony, his sisters Yvette and Liza.
Frank was the first born and only boy in our family. He would often refer to Dad as “My Old Man” which was a term of endearment. Through ups and downs they were inseparable. Dad would be blessed with four daughters that would be known as “Charlie’s Angels” in reference to the television series from 1976. Dad had love for everyone and in everything he did, family was the focal point. He worked hard and was always involve in building something, installing plumbing or fixing machineries, he was the jack of all trades. He continually passed down valuable skills, and life lessons to his son, daughters, and grandchildren.
Dad always loved the outdoors, whether it be outside sitting on the deck at the camp, watching the river waiting for a salmon to jump; or hitching a ride on a side by side, to explore the beaver ponds and moose stands; or being brave on the back of Frank’s skidoo living fearlessly. Dad cherished the simple pleasures in life and having his family around him is what brought him happiness.
Later when Frank moved to Rio Grande Road he gave dad a piece of land so he could build his house and remain close to him. On January 2nd, 2018 dad’s life would forever change with Frank’s unexpected passing. Dad never recovered from losing Frank and we saw a piece of him die that day.
Dad would never leave us without giving us hugs (that would turn into squeezes) and kisses. He would always say “Daddy (Pépère) loves you, don’t ever forget that ok!” Dad will always live on in all of us, whether it be through our facial characteristics or mannerisms. The wisdoms and values that he imparted on us, which we have passed down to our children, will continue to live on through our future generations.
There will be no visitations at Elhatton’s Funeral Home (www.elhatton.com), Bathurst. Funeral Mass will be celebrated from Holy Family Church, Bathurst, on Friday, March 12, 2021 by invitation only.
Donations in memory of Charlie may be made to the Heart and Stroke Foundation or a charity of the donor’s choice.
Our Staff