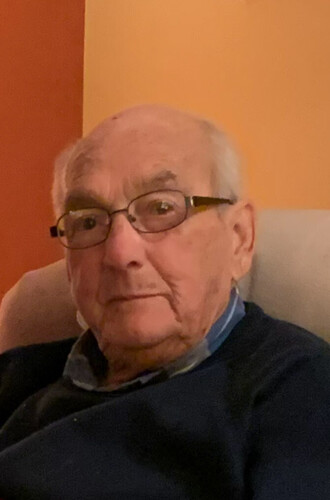 Bathurst - It is with heavy hearts that Vivian and Steven announce the sudden passing of Al LeBreton, of Patterson Cres., Bathurst, which occurred Monday May 10, 2021 at the Dr. George L. Dumont Hospital, Moncton at the age of 83.

Born in Tracadie, he was the son of the late Richard and Elizabeth (Chiasson) LeBreton.

He is survived by his wife Vivian (Babin) LeBreton, his lifetime love and his most cherished son, Steven (Brenda Lynn Duguay) LeBreton of Bathurst, whom Al loved very much along with his three amazing grandsons: Ryan, Cory and Robby. They were the world to him.

Besides his parents, he was pre-deceased by a brother, Leonard (Annette) and a sister, Noëlla Thériault (Aurele).

He was a service technician for most of his life for "Al's T.V. & Radio".

He loved the outdoors, especially trips "Up River" in his lifetime to spend time at his camp. He would fish, bird hunt and just drive around. That made him happy.

Following his wishes there will be no visitation or funeral service. A simple graveside gathering for family and close friends will be held at a later date because of Covid restrictions.

A huge thank you to those who assisted him in his final days, the doctors, nurses and the Extra Mural Program who were very, very helpful and considerate to his feelings.

Arrangements are in the care of Elhatton’s Funeral Home (www.elhatton,com), Bathurst. Donations in memory of Al may be made to the Bathurst Animal Shelter of a favorite charity.