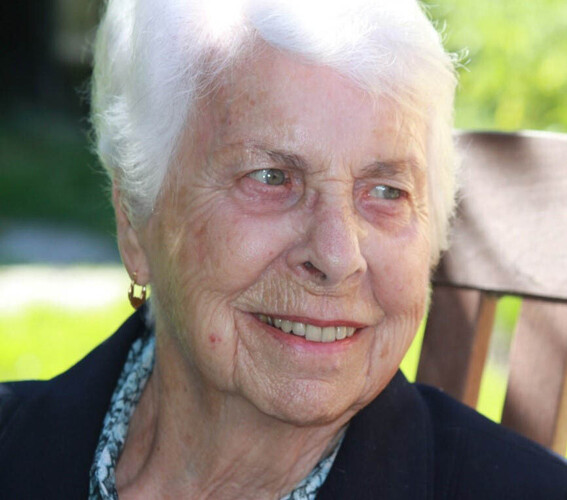 After a life well lived, Margaret Chalmers (nee MacDonald) passed away peacefully in Lachine, Quebec on May 22, 2021 in her 96th year. Margaret was born in Bathurst, New Brunswick to Gilchrist and Winnifred (Taylor) MacDonald. She studied nursing at the Royal Victoria Hospital in Montreal returning home to Bathurst after graduation in 1946. It was there that she married Scott Chalmers and all of her five children were born.

Through Scotty's work the family lived in various pulp and paper towns including Bathurst, New Richmond Quebec, Stephenville Newfoundland, and Terrace Bay Ontario. No matter where we lived, Mom always made the house we lived in a home. She devoted her life to raising her five children to become independent thinkers and good citizens, always ensuring that we felt like the most important people in the world. She handled a multitude of childhood (and adult) illnesses and challenges with ingenuity while supplying endless desserts, a true testament to her skills and love. She endured with bravery, along with Scott, the tragic loss of son David in the Ocean Ranger disaster. Upon retirement, Margaret and Scott settled in Cobourg, Ontario. They enjoyed several years there together until Scott's passing in 2013. Margaret made the best of things without the love of her life, moving to Lachine and living up to and through the past year of the pandemic with determined good spirit and sharpness of mind.

Due to Covid-19 restrictions, a celebration of Margaret's life will be held later and she will be laid to rest in Bathurst. Those wishing to make a donation in memory of Margaret can do so to the David Gilchrist Chalmers Scholarship (c/o Mount Allison University, 65 York Street, Sackville, New Brunswick E4L 1E4; online at www.mta.ca/donate “Make the donation in honour of an individual (David Gilchrist Chalmers Scholarship); or call Marcie Meekins at 506-871-8902), or to the charity of their choice.