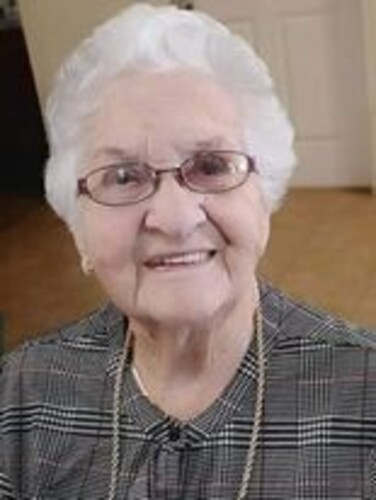 Bathurst - The family of Hilda Florence (Clouston) MacKay announces her passing at the age of 97.

Hilda was the daughter of the late Minnie (Good) & Willard Clouston of Carron Point.

She was the wife of the late Medley MacKay, mother of Willard (Faye) and grandmother to Jason (Tracy) & Peggy-Lane Clarke (David). Her heart would skip and extra beat whenever she spoke of her great-grandchildren Caden (Layla), MacKayla (Mike), Robbie, Owen and Ryan.

She is also survived by her brothers: Murray (late Edna), Hugh (Edith), sister Essel (Alton) Smith and sister-in-law Alma Clouston, along with several nieces and nephews.

Her family would like to express their overwhelming gratitude to Lillian Drapeau along with her staff at Southern Comfort Villa. The total care package that Hilda received from them was above and beyond their own expectations. She was always treated with love, compassion, dignity and respect and we will never forget everything you have done, Hilda’s angels without wings.

The family will receive relatives and friends on Wednesday evening from 6 to 8 p.m. at Elhatton’s Funeral Home (www.elhatton.com), Bathurst. Funeral Service will be held on Thursday afternoon September 9, 2021, at 2 p.m. from Saint-George’s Anglican Church, King Ave., Bathurst.  Donations in memory of Hilda may be made to Saint George's Anglican Church or a favorite charity.