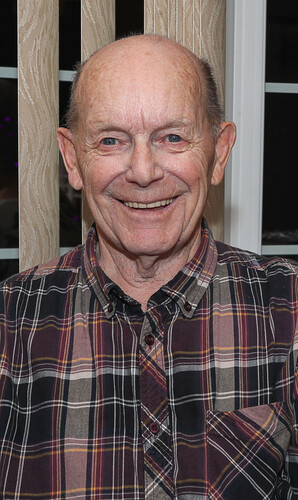 Bathurst – Jean Guy Doucet, husband of 60 years of Clara (Morrison) Doucet, of Bathurst, passed away at the Chaleur Regional Hospital in Bathurst, on Sunday, November 28, 2021, at the age of 82.

He was the son of the late Normand Doucet and the late Berthilde Arseneau.

In addition to his loving wife, he is survived by two children: Daniel Doucet (Huguette Roy) of North Tetagouche and Monique Doucet, little sister of the Myriam Beth'lehem Family of Lac-au-Saumon, QC.

He is also survived by many brothers-in-law, sisters-in-law, nephews and nieces.

Besides his parents, he now rests with his siblings: Ronald, Alvin and Pierrette.

Jean-Guy worked as a land surveyor, he was a 4th Degree member of the Knights of Columbus and the Myriam Offering Challenge. For many years he was a member of the Management Board for the Diocese of Bathurst and was very involved in several committees and movements of the parish of Our Lady of the Rosary.

Visitation will be held from Elhatton Funeral Home (www.elhatton.com), Bathurst, on Friday, December 3 from 2 to 4 and 7 to 9 p.m., and on Saturday, December 4 from 9 to 10:30 a.m. until departure for the Funeral Mass at 11:00 a.m. from Our Lady of the Rosary Church, Bathurst.

In memory of Jean-Guy, Mass offerings would be greatly appreciated or a donation to the Heart and Stroke Foundation.

A special thank you to all those who accompanied him to the end with their good care, support or prayer.