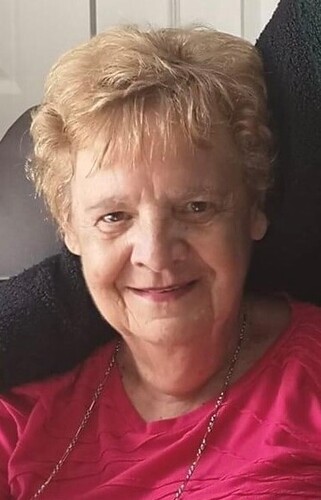 Bathurst – The family sorrowfully announces the sudden passing of Alma LaPointe, of Bathurst, which occurred on Tuesday January 4, 2022 at the Chaleur Regional Hospital, Bathurst at the age of 75.

Born in Bathurst, she was the daughter of the late Harold and Hilda (Boucher) Boucher.

She was predeceased by her husband, Harvey LaPointe

She is survived by her son, Frankie (Lise) of Bathurst and two daughters: Allison (Richard Vienneau) of Bathurst and Francine (Terry) Smith of Charlottetown, PE. Grandchildren: Joshua, Lucas, Justin, Jason, Tanner and Chelsey. One great-grandson, Jackson.

She was predeceased by her sister, Adrienne Arseneau and four brothers: Gervais, Albany, Sylvain and Rhéal.

There will be no visitation at the funeral home. Funeral service will be celebrated on Monday January 10, 2022 at 3 p.m. from Elhatton’s Funeral Home Chapel, St. George St., (www.elhatton.com) Bathurst. Masks, proof of vaccination and a government issued ID will be required.

Due to covid restrictions, a maximum capacity of 50 people are permitted at the service.