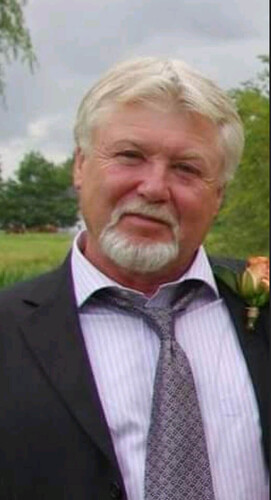 South Tetagouche - It is with heavy hearts we, the family, announce the passing of David Henry, of South Tetagouche, which occurred at the Chaleur Regional Hospital on Saturday, June 4th, 2022, at the age of 64.

David chose to spend his life living in the area where he was born. He was the son of Adrienne Hachey and the late Raymond Henry. However, he was raised by his late grandmother, Rose Henry.

Besides his mother of South Tetagouche, David is survived by his beloved spouse, Lisa Theriault, his daughter Stephanie Kean (Kevin) of Oromocto, his son David “Davy” (Gina Slaney) of Bathurst and his six loving grandchildren: Kassius, Shelby, Oliver, Clara, Ruby and Mikayla.

For anyone who knew David, you were quick to realize his comedic sense of humor and how he spun life. He believed you live it once and must live the best you can without regret (some regret was tolerable if you can laugh later). Many people have been fortunate enough to sit at his island during a visit and walk away with a smile along with a bit of an ab workout you’d remember.

During his most recent times of what would make most people hide and push everyone away, it was apparent David was different. Perhaps a bit tired, but still he had a way to make us smile when we should cry. We will miss this gift in our lives.

We must think of him in his passing and smile because that is what he wanted.

There will be no visitation at the funeral home. Funeral service will be held Monday June 13th, 2022 at 2 p.m. from Elhatton’s Funeral Home (www.elhatton.com) Chapel, Bathurst.

Donations in memory of David may be made to the Canadian Cancer Society or a charity of the donor’s choice.