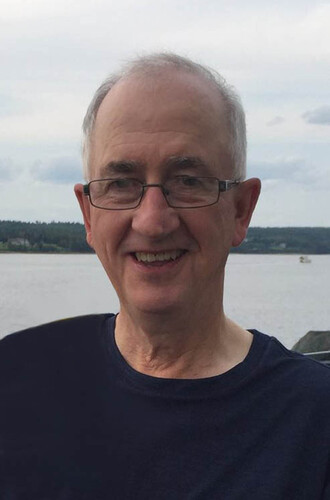 It is with the utmost heartbreak that the family of Garfield “Bud” Spurrell announces his passing, which occurred on Sunday, September 4th, 2022 at the Dr. Everett Chalmer’s Hospital in Fredericton.

Originally from Butter Cove, Newfoundland, he was the son of the late Levi and Melvie Spurrell.

He leaves to mourn his devoted wife of 39 years, Judy (Furlotte) Spurrell of Belledune and their daughter Kelsey Spurrell-Cassidy (Matthew) of Rusagonis. He also leaves his treasured granddaughter, Lydia.

Garfield is survived by his older brother, Raymond (Mandy) Spurrell of Butter Cove, NL and younger brothers: Dennis (Bev) Spurrell of Butter Cove, NL, and Roger (Michelle) Spurrell of Saint John’s, NL. He is also survived by his brothers-in-law: Robert (Fern) Furlotte of Bathurst, Aurele (Linda) Furlotte of Moncton, and sisters-in-law: Joyce (Claude) Lapointe of Thompson, MB, and Jane (Berry) Wellman of Springdale, NL. He leaves behind 13 nieces and nephews and several great nieces and nephews.

Garfield’s story starts in Butter Cove Newfoundland. Despite loving being out on the water, he knew his susceptibility to sea sickness and his inability to swim meant that fishing was not his destiny. He moved to Toronto with his best friend Paul at the age of 19. Shortly upon his arrival to the big city, he met the love of his life Judy. Wanting to raise his daughter close to family and away from the city he moved to Belledune to begin his career as a welder at the Brunswick Smelter in 1989. A man that valued education and always wanting to better himself, he obtained his second trade as a Journeymen Millwright in 2003.

During his 30+ years at the Smelter he gained the reputation as a man with a strong work ethic and was respected by his peers. He loved his job and even after retirement he continued his career with the Millwright Union (United Brotherhood of Carpenters and Joiners of America). He had fully embraced the opportunity to be at different worksites both within and outside the province and had no intentions to stop working anytime soon.

A true family man, he wanted to be the breadwinner for his family. He loved coming home and being greeted by Judy with a homecooked meal already on the table. They complemented each other like yin and yang and did everything together. He was a doting father and grandfather. Proudly sharing the fact that Kelsey had recently earned her Doctor of Audiology degree. The apple of his eye was his granddaughter, Lydia. Even though they only had two short years together she will always be reminded of the love her Grampy had for her.

A pilar of the community, Garfield was a dedicated volunteer firefighter for the Village of Belledune for 32 years. His son-in-law Matthew will continue his legacy to help and train other firefighters.

He was a quiet man with a heart of gold. He loved life and embraced the pleasures of his free time by being in the outdoors, fishing, watching Land and Sea, hiking and traveling with Judy. He often caught you off guard with his dry sense of humour. For being a Newfoundlander, he was an awful storyteller, but he could hold a conversation with anyone about anything.

The family would like to thank those who have helped them over the past seven months, allowing them to be by Garfield’s side the entire time. He was one in a million who had fought hard and defied the odds in many ways, but ultimately God had other plans.

XOXO you will be deeply missed and always in our hearts, until we meet again.

Honouring his wishes there will be no visitation at the funeral home. A celebration of life will be held Sunday September 11th at 2 p.m. at his home in Belledune. All are welcome.

In Garfield’s memory, the family asks that you may consider donating blood, something that he did faithfully for many years.