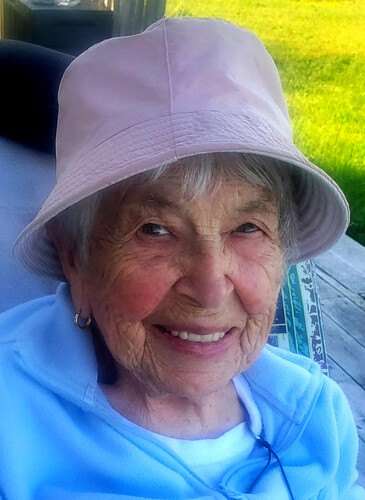 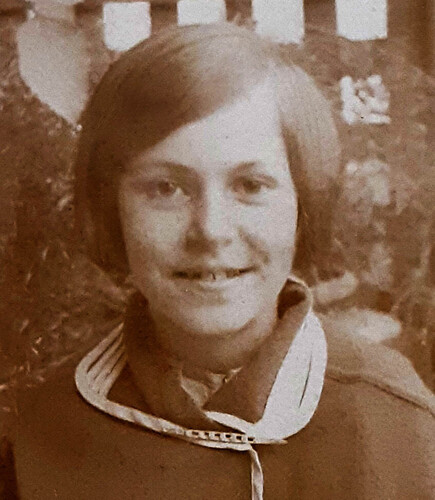 When Lucy Jarratt was a very small child, she had an irrational fear of bridges. Trips by horse and wagon to visit family in Tetagouche or Miramichi were marked with temper tantrums when she steadfastly refused to go further.

Lucy eventually outgrew her fear of bridges and crossed many, both physically and metaphorically, throughout her 105 years. On Friday night, September 23, 2022, Lucy made her way peacefully across the last bridge of her life, with dignity and at home, her family and caregivers by her side.

She was born Lucy Catherine Hennessy in 1917, in the Hennessy family homestead on St. Peter Avenue in Bathurst, as were all her eight siblings. She attended Holy Family Convent School and Sacred Heart Academy, graduating with an academic and commercial diploma in 1936.

She also leaves 12 grandchildren and 17 great grandchildren from across Canada and the United States to Ireland, as well as dozens of dedicated nieces and nephews on the Hennessy, Wesenberg and Jarratt sides of the family.

Lucy lived long enough to see almost all her childhood friends pass before her, but she made new ones at every opportunity, including Lorraine and Anne Marie Doucet, Constance Wong, Yvette Lavigne, Isabelle Hains and countless others.

Lucy was the last surviving member of her immediate family. She was the descendent of a long line of Irish and Scottish immigrants, Hennessys, Morans, Kanes, Vickers, Frasers and Urquharts who came to Canada from the Old Country in the late 18th and early 19th centuries and made the newly established colony of New Brunswick their home.

Through their pioneering spirit, they established settlements along the Miramichi and Tetagouche in the early 1800s. By 1914, her parents, Patrick and Beatrice (Moran) Hennessy, settled in Bathurst where they, and her uncle Manus Kane, took over what was then the “Doucet” homestead (now the Doucet Hennessy House).

Growing up on a successful 200 acre farm in the middle of the Depression, there was always plenty of work for Lucy and her siblings to do: from milking the cows and feeding the horses, chickens, geese, ducks and pigs, to delivering the milk, making butter and cream, tending to the apple orchards and fields.

The separation of labour into women’s and men’s work was evident in the Hennessy house, with Lucy and her sister Anna becoming the caregivers of their younger siblings, as well as skilled cooks, seamstresses and knitters. It was to serve Lucy well as she raised nine children on a shoestring budget.

Lucy worked as a Medical Secretary for Dr. L. D. Densmore from 1936 until he retired in 1959. She had many fond memories of “The Doctor” - a First World War veteran whose battlefield experiences as a front-line surgeon in Belgium and France made for interesting conversations over a cup of tea at the end of a long work day. She later worked for her brother, Dr. Robert “Bobby” Hennessy, until she herself retired in 1984, just as computers were taking over the workplace.

Lucy was witness to some of the most significant events of the 20th and 21st century. She was born in the midst of the Spanish Flu in 1917 and survived the COVID pandemic of 2020-2022 unscathed; she lived through the Great Depression, the First and Second World Wars and countless other global conflicts; she lived to see five monarchs and 20 Prime Ministers; she saw the last sailing ship leave Bathurst Harbour in the early 1920s and saw a man land on the moon. She was keenly interested in medicine and had a front row seat to all the major developments, from the discovery of Penicillin and the eradication of Tuberculosis to the introduction of the Polio vaccine and the fight against AIDs.

Lucy was a lifelong volunteer whose religious faith and strong moral compass led her to positions of leadership in numerous local organizations. She was one of the founding members of the Holy Family Catholic Womens’ League when it formed in the 1930s. With all her male family members having served in the Second World War, she naturally joined the Royal Canadian Legion Ladies’ Auxilliary and was a fixture at many banquets and weddings throughout her long life.

Lucy was surrounded by a reliable team of women who put the “care” in caregiving over many years and whom the Jarratt family would like to personally thank: Melda Hebert, Jackie Meyer, Beverly Biseau, Pauline Roy, Michelle Roy, Melanie Belanger, Darlene Belanger, Sharon Connolly, Jacqueline Gauthier and many others. Also thanks to the Staff at Extra Mural, especially Solange, Lyne, Carmen and Herica who provided invaluable support and encouragement in the final days of Lucy's life.

On the night Lucy passed away, there was a spectacular pink and lavender sunset in the sky over Bathurst and Hurricane Fiona was set to hit the Maritimes. As the sky darkened with heavy storm clouds and the winds picked up, Lucy unwrapped herself from this mortal coil and took the final step in a long journey to the place of peace that was her ultimate destiny.

Donations in Lucy’s memory can be made to a charity of the donor’s choice or to the Association Maison Doucet Hennessy House Association Inc. through www.elhatton.com or at www.DoucetHennessy.com.