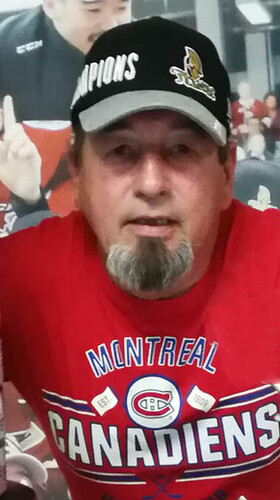 It is with profound sadness that we, the family, announce the passing of our father and brother, Brian Morrison of Bathurst, which occurred at the Chaleur Regional Hospital on Saturday, November 5th, 2022, at the age of 65.

Born in Bathurst, he was the son of the late Earl and Margaret (Jeffers) Morrison.

Brian leaves to mourn his daughter, Jamie Harriston and grandchildren: Abigail and Ricco. He also leaves behind a stepson, Tyler Power.

He is also survived by his aunt, Ruby Clark and uncle, Leigh Morrison and several nieces and nephews.

Brian worked at various jobs in Bathurst and Alberta. He was a staunch supporter of the Montreal Canadiens.

The family would like to thank the caregivers at Southern Comfort Care Home and the doctors and nurses of the I.C.U of the Chaleur Regional Hospital for the care and compassion shown to Brian. Donations in memory of Brian may be made to the SPCA or a favorite charity. Arrangements are in the care of Elhatton’s Funeral Home (www.elhatton.com), Bathurst.