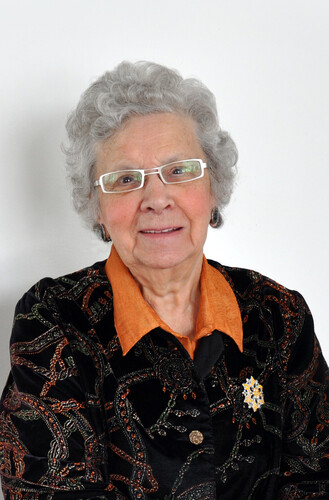 Bathurst – Mrs Eugénie Doucet, wife of late Aurele Doucet (1983) and late Francisco Figueroa Garcia (2010), passed away at the Chaleur Regional Hospital in Bathurst on November 10th, 2022 at the age of 100 years and 6 months.

Born in Bathurst, she was the daughter of late William (Willie) Burke and Hermine Hachey.

She is also survived by one half sister, Gabrielle Burke Vienneau.

Besides her two husbands, she was pre-deceased by an infant son Joseph, one daughter, Charlotte (2019), her brothers: Ernest, Eric, Michael and her sisters: Leah, Therese, Jeanine and Viola.

Eugenie lived her life to the fullest and was always on an adventure. She took care of her two aunts Eugenie and Estelle Hachey and was court stenographer when she was married at the age of 20. She participated in many activities such as school board, church and many different choirs along the way. She was very musical and transmitted this to her children. The family sang together at many functions. At the age of 52, with a 30-hour course of Spanish, she uprooted her family, the youngest being 6 years old, and they left for Spain. The family lived there for a year, they came back to Canada and after 6 months they all went back for another seven years. They all returned, except Maurice who had a young Spanish bride, when our father was sick and wanted to be with all his family. After he passed away, she went to Nova-Scotia for a year where she went back to university. She then came back to Bathurst and proceeded to write a book about her Spanish experience. Once this book was published, she returned to Spain to visit Maurice who still lived there, where after 12 years of being alone, she met and married Francisco. She returned to Canada in 2009 and lived at the Villa Chaleur until she broke her foot and went to live at the Oasis, where she was very well taken care of. She is now back by Dad’s side. The family would like to thank the staff at La Brise de l’Oasis of Union St. for the excellent care of our mother. They treated and loved her like their own mother.

The family receive relatives and friends after 2 p.m. on Wednesday November 16th, 2022 at Elhatton’s Funeral Home (www.elhatton.com), until time of funeral which will be held at 4 p.m. at the Holy Rosary Church on St Peter’s Ave. Family and close friends will gather in the church hall after the service.

Donations in her memory, can be made to the Alzheimer’s society which was something very close to her heart, or to a charity of your choice.