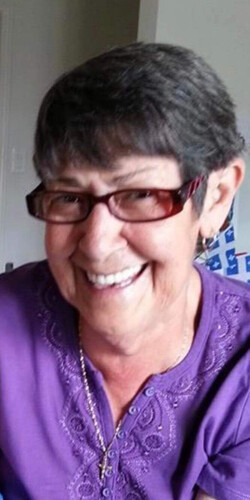 It is with great sadness that we the family, announce the passing of Mrs. Yvonne Aubie, wife of Kenneth Aubie of Bathurst, which occurred Sunday, January 1, 2023, at the Chaleur Regional Hospital, Bathurst, at the age of 79.

Born in Allardville, she was the daughter of the late Médor and Martina (Lagacé) Duguay.

Besides her husband, she is survived by three daughters: Louise Aubie (Greg Triska) of Langton, ON, Brenda Aubie of Millet, AB and Michelle Aubie (Luc Raymond) of Gatineau, QC.

Besides her parents, she was pre-deceased by a daughter, Diana Aubie, a brother Laurent and a grandson, Benjamin Morneau.

The family would like to offer a special thank you to her cousin, Patricia LeBlanc, her sister-in-law, Claudettte Duguay and to Kevin and Nicole for the excellent care provided to Yvonne over the years.

Funeral Mass will be celebrated at later date this spring.

Donations in memory of Yvonne may be made to the Canadian Cancer Society or to a charity of the donor’s choice.