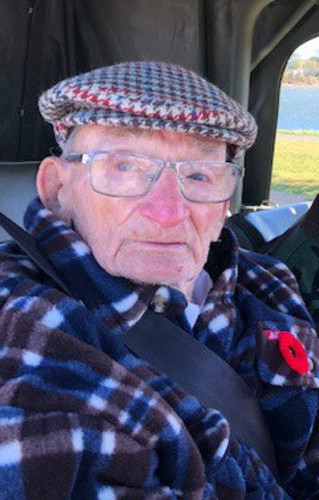 It is with great sadness that we, the family, announce the passing of Sprague Wiseman, beloved husband of Bette (Graham) Wiseman of Bathurst.

He passed away peacefully at the Robert L. Knowles Veteran’s Unit on Saturday, September 28, 2019 at the age of 98, surrounded by his family.

Born in Bathurst, he was the son of the late George S. and Hannah May (Knowles) Wiseman.

Besides his wife of 67 years, he is survived by his children: Graham (Nancy), Donna Roy (Donald), Holly Vibert (Randy), Joey (Shelly), Joy Wiseman and Melony Knowles (Colin). He is also survived by 9 grandchildren and 9 great-grandchildren.

He is survived by one sister Pricilla Lange of Lindsay, ON and a number of nieces and nephews.

He was predeceased by his parents, brother Roscoe, sisters: Rowena and Ruth, an infant son and a grandson, Trevor.

He left Bathurst in July 1940 and served overseas with the Royal Canadian Army North Shore (New Brunswick) Regiment and the Cape Breton Highlanders. He fought in Italy, Southern France, Belgium, and the Netherlands during World War II.

When he returned home in January 1946, he ran a take-out diner next to his father’s general store in East Bathurst and drove taxi.

He later worked at the former Consolidated-Bathurst papermill for 33 years retiring as a Shift Engineer in the Steam Plant in 1985.

He loved the outdoors and he enjoyed spending time at his camp at the Caribou cluster especially during the moose hunting season.

According to his wishes, there will be no visitation at the funeral home. A funeral service will be held on Thursday, October 3, 2019 from the First United Church, St. Patrick St. at 2:00 p.m. with the Royal Canadian Legion service to follow at the Highland View Cemetery.

The family would like to express a very special thank you to all the staff at the Robert L. Knowles Veteran’s Unit for their loving care they gave to him for the past 8 months and especially during his last days.

In memory of Sprague, donations to the Robert L. Knowles Veteran’s Unit, the Herman J. Good V.C. Branch 18 or a charity of the donor’s choice would be greatly appreciated by the family.

You voluntarily served your country in World War II.

You lived a good and long life.

Your work is now completed here on Earth.

You have now earned the Right to Rest In Peace with the Lord Almighty!