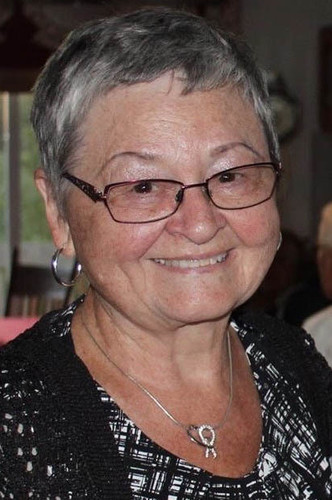 It is with great sadness that the family wishes to announce the passing of Lillian (Murchison) Michaud, 74 of Bathurst, NB at the Chaleur Regional Hospital on November 23, 2019 after a courageous battle with cancer. Born in Four Falls, NB, she was the daughter of the late Wilmot Earl and Mary Olive (Hartt) Murchison.

Lillian, is survived by her husband of 53 years, Ron; her children Peter (Sue) of Hanwell, NB, Wayne (Jackie) of Bathurst, NB and Janet (Brad) of St. Agatha, ON; her 4 beautiful grandchildren Amanda, Katie, Shane and Olivia; her brothers Preston (Marie-May) of Grand Falls, NB and Earlen (Shirley) of Ancaster, ON as well as several nieces and nephews.

She was predeceased by her parents, her siblings Sheldon, Delbert, Merrold, Beacher and Adrian Murchison, Emma Holmes, Leitha Holmes, Edith and Etta Murchison.

After high school, Lillian became a Registered Nursing Assistant (RNA) and worked for the Grand Falls General Hospital until the family moved to Bathurst in 1985. She then worked at the Chaleur Regional Hospital until her retirement in 2005. After retirement, she worked as a home care nurse taking care of many people in the Bathurst area and was also a member of the Catholic Women’s League in Bathurst for over 20 years.

During her nursing career, Lillian was a member of the RNA association (ANBRNA now known as ANBLPN Association of New Brunswick Licenced Practical Nurses since 2002). She held many positions over her 20+ years with the association including President. The Association dedicated their boardroom in her name as a thank you for her work and years of service. Furthering the advancement of the RNA program and continuing education for the RNA’s was a passion to Lillian and it was one of many accomplishments she helped to achieve with the association.

She loved summer vacations with her grandchildren particularly the vacations to PEI. She was always present in her grandchildren’s lives never missing a game, a performance, or a graduation. Spending Christmas with her family in Florida, in 2012 was a memory that she cherished. Lillian enjoyed her retirement. Lillian and Ron travelled on several bus tours to places in Canada and the USA with close friends, the Smiths and the Durlings.

The family would like to thank the staff of the Palliative Care Unit at the Chaleur Regional Hospital as well as her dear friend Norma Lapointe Clement for the care Lillian received while she was there these last few weeks. We are forever grateful.

Donations in Lillian’s memory may be made to the Canadian Cancer Society or to the Catholic Women’s League or a favorite charity.