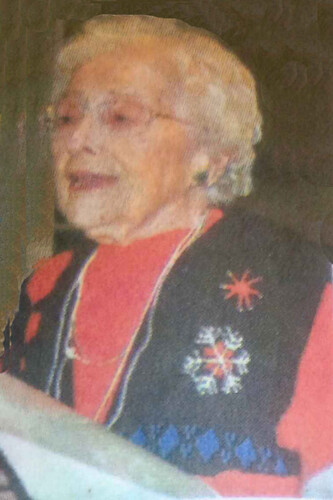 It is with celebration of a life well lived that the family of Jessie Horsley, wife of the late Maurice Frederick Horsley, announce her passing which occurred on Tuesday, July 21st, 2020 at the Foyer Notre-Dame-de-Lourdes in Bathurst at the age of 96.

Born in Bathurst, she was the daughter of the late William and Beulah (Lyon) O’Donnell. She was the last surviving member of her immediate family.

She is survived by two sons: William of Moncton and David of Beaverton, Oregon, USA. Several nieces and nephews.

Besides her husband and parents, she was predeceased by a daughter, Linda Newell as well as her sibling: Hazel O’Donnell, Brycie Kavanaugh, Dr. Walter O’Donnell and Ernest O’Donnell.

Due to the current pandemic, a funeral service will be held at a later date from the First United Church in Bathurst.