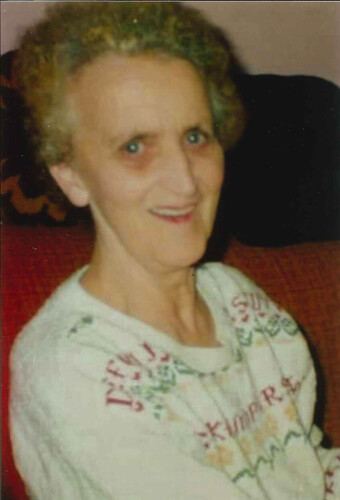 Bathurst – It is with great sadness the family of Simonne Doucet, wife of the late Émile Doucet, announce her passing which occurred at the Chaleur Regional Hospital in Bathurst where she was surrounded in the comfort of her loved ones on Friday April 16th, 2021 at the age of 83.

Born in Bathurst, she was the daughter of the late Wilfred and Délima (Couture) Doucet.

She is survived by five sons: Michel of Toronto, ON, Émilien, Roger (Sylvia Dunn), Jean-Pierre (Tammy Dugas) and Denis (Lina Boudreau) all of Bathurst.

Two sisters: Janet Chamberlain and Irene Couture both of Bathurst.

Besides her husband and her parents, she was pre-deceased by many brothers and sisters.

Simonne who was known as Ma/Mom, mèmère, mema, grandma and matante to everyone who stepped into her life or in her home, whether you were family or a complete stranger.

Simonne had the biggest heart and always ended her conversation to everyone with “I love you. God Bless.”

She will be deeply missed and never forgotten by all her family and all who knew her.

There will be no visitations at the funeral home. A family gathering and funeral service will be held at a later date.

Arrangements are in the care of Elhatton's Funeral Home (www.elhatton.com), Bathurst. Donations in Simonne’s memory may be made to the IWK Hospital or a charity of the donor’s choice.