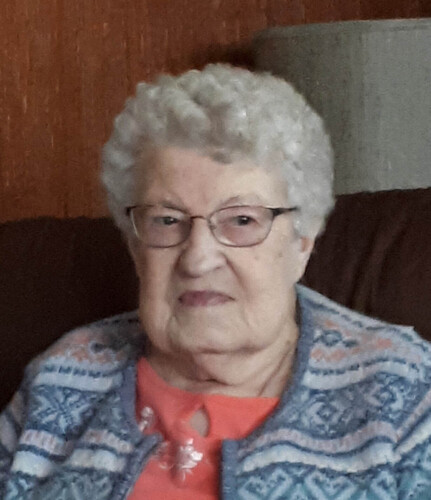 It is with great sadness that the family of Mrs. Verna O’Neil, wife of the late George J. O’Neil, of Riverside Dr., Bathurst, announce her passing which occurred on Friday June 25, 2021, at the Chaleur Regional Hospital, Bathurst, at the age of 90.

Born in Middle River, she was the daughter of the late Evy and Hazel (Smith) Pentland.

Verna was a member of the Holy Family Catholic Women’s League, Bathurst.

She is survived by three daughters: Brenda Doucet (late Melvin) of Maxville, ON, Peggy Morrison (Brian) of P.E.I. and Kathy O'Neil (late Joey Melanson) of Bathurst.

One son, David of Middle River.

The family would like to say a special thank you to Rachelle Lanteigne her personal caregiver from Atlantic quality care and the Doctors and staff at the Chaleur Regional Hospital.

There will be no visitation at the funeral home. A private celebration of life will be held from Elhatton’s Funeral Home Chapel (www.elhatton.com), Bathurst. Donations in memory of Verna may be made to the ALS society, Alzheimer’s Society or to a charity of the donor’s choice.