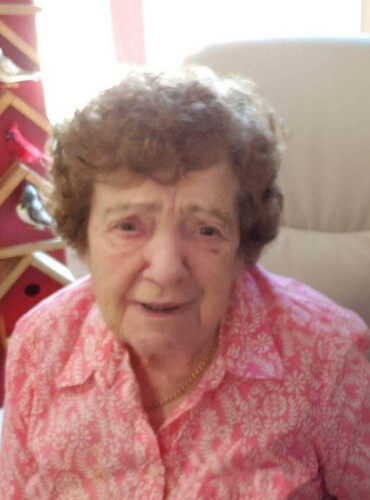 Bathurst – It is with great sadness that, we the family announce the passing of Mrs. Alma Godin, wife of the late Abel Godin, formerly of East Bathurst, which occurred Thursday September 16, 2021, at the Chaleur Regional Hospital, Bathurst, at the age of 98.

Born in Tremblay, she was the daughter of the late Jean-Baptiste and Emma (Fournier) Doucet.

She is survived by five sons: Roger (Mona) of Dieppe, Daniel (Marguerite), Ronald and Gilbert (Denise) all of Bathurst and Jacques (Louise) of Beresford.

One brother, Victorin Doucet of Bathurst.

Besides her husband, she was pre-deceased by a daughter, Diane; her brothers and sisters: Richard, Ernest, Armand, Fred, Malvina, Florestine, Julia, Ernestine, Stella and Eva.

The family would thank the staff at the Manoir Brise de L'Oasis for the excellent care given to Alma during the past several years.

There will be no visitations at the Funeral Home. A private service for immediate family only will be held from Elhatton’s Funeral Home Chapel. Donations in memory of Alma may be made to a charity of the donor’s choice. Arrangements are in the care of Elhatton Funeral Home (www.elhatton.com), Bathurst.