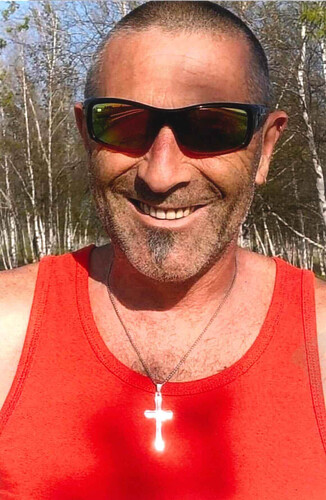 It is with great sadness, the family of Michel Godin at the age of 56 on October 30, 2021 at the Chaleur Regional Hospital, Bathurst, announce his passing with family at his side after courageously battling cancer.

Born in Bathurst, he was the son of the late Leandre and Eva (Roy) Godin.

Michel will be sadly and greatly missed by his wife Josée Bertin.

Michel also took under his wings and considered them daughters, Kelsey Doucet and Karen Henry.

Michel was going to be “Pépère” to future granddaughter Alexis.

He was and uncle to many nieces and nephews. Michel was also a great “bro” to all of his friends, and he will never be forgotten. Also, a very special thank you to a very special friend Eric Maltais for all of your support given to them during his battle against his illness.

He will now be resting in peace besides his son predeceased at infant age “Bruce and also several brothers and one sister.

There will be no visitation at the funeral home. A celebration of his life will be held at a later date and time to be announced.

Arrangements are in the care of Heritage Funeral Home, (www.mfheritage.com), Beresford.