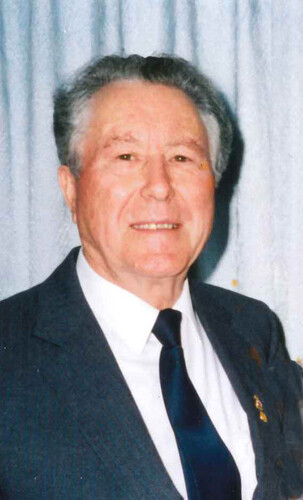 Norman Henry of Bathurst NB passed away peacefully at the Robert L. Knowles Veteran's Unit on November 11, 2021, at the age of 99.

Born in South Tetagouche NB he was the son of the late George and Rose (Frenette) Henry.

Norman will be remembered by those who knew him best as a kind and loving, generous hearted man who had words of wisdom when you needed a listening ear. He was well loved by friends and family. He also believed in living life fully.

Here is a story of a life well lived.

Norman began life the eldest of 12 siblings and so learned the lessons of hard work for family at a young age. He worked in his early teens at his father's side in lumber camps, not only cutting but as a teamster. Like other men he learned to knit and darn his own socks and mitts! In later years it was he who taught his wife the same skill!

Once of age he was eager to join the army as a Private with the P.E.I. Highlanders. He spoke little of these years but more about his dream to return home and marry his childhood sweetheart Eleanor. His dream came true following the war.

Although having a limited education of grade four he studied hard and became a proud graduate of the first grading class of the Ranger School in Fredericton in 1947.He worked in the Bathurst area for 34 years with the Dept. of Natural Resources until his retirement as District Ranger. His motto of " treat people well and they will treat you well " served to everyone's advantage. He gave the greatest gift ...love and time to friends and family. He also knew Smokey the Bear personally and so impressed the smallest child!

Other than work Norman was well known for his energetic pursuit of hobbies...there was curling, golfing, being out in the bay known affectionately as the "Sandbar Sailor " at the local Yacht Club. He tried to perfect his pool game and " bending the elbow" at the Legion with his buddies. There was much laughter around card tables as longtime member there well into his 90's.

Upon retirement Norman continued to find enjoyment in the "woods". He built and operated a small sawmill near his camp in South Tetagouche. Often joined by friends and family ...whether sawing or storytelling or tractor rides for his grandchildren and sawdust slides to play in, Norman hosted many a party there until his 70's.

In his 70's Norman turned his interests to smaller blades and tools and began research on becoming an amateur luthier. New friendships developed as he learned the art of crafting violins. Although tone deaf he was able to succeed in making pitch perfect instruments. His small workshop then served as a welcoming continuation of Groundhog Day celebrations (As well as his Birthday). Of course, now his own fiddles could join in the celebrations - old friends and his favorite female fiddle group know to him as " his girls "!

There is always sadness too in a life well lived for so long. The death of his wife, his son, such sadness lingers.

Yet Norman did find loving companionship in his later years. At the age of 87 he remarried. He and his bride could be seen EVERY DAY as she was fond of saying, at the local Papa Joe's! Many a Home Care worker drove this pair to their lunchtime date! Thanks to these dedicated women, Norman received the quality of life he desired. They are the unsung heroes of the aging.

Upon arrival at the Robert L. Knowles Veteran's Unit in his mid 90's Norman was once again surrounded by gentle souls and loving hearts. Both he and his family were uplifted by the welcoming and happy spirit of this place, his last home on this earth. We give special thanks to such wonderful staff .....understanding that there was nothing like a good fudgestick to brighten up his day !

We also extend a heartfelt thank-you to Dr. N. Cauchon for her kind attention to Norman's dignity and comfort. Her calm manner was always reassuring.

Norman joins his wife Eleanor (Ellis) who passed away in 2004 and 2nd wife Imelda (Aubie) Henry who passed in 2016.

Besides his wives, he was predeceased by a son Lorne, brothers: Owen, Ivan, Arthur, Eugene, Donald, Raymond and sister Eleanor.

There will be no visitation. Funeral mass will be celebrated at the Holy Family Church on Wednesday November 17th at 2 pm. Proof of double vaccinations and I.D. are required. In memory of Norman, donations to the Robert L. Knowles Veteran's Unit or a charity of the donor's choice would be appreciated.

Funeral arrangements are in the care of the Elhatton's Funeral Home (www.elhatton.com), Bathurst.